A lot our daily actions are on an autopilot mode, it is also a known undeniable fact that habits shape us. The more often we perform an action or behave a specific way, the more it gets physically wired into our brain hence breaking an old habit or forming a new habit is ultimately about rewiring our brains.

Habits are the brain’s internal drivers and are found in Basal Ganglia”, based on what we do repeatedly both good or bad our brain forms a neuronal connection. The more specific act we perform a specific neuronal pattern gets stimulated and it becomes strengthened in your brain.

It requires a strong will and to start with, we need to interrupt this hardwired chain and for adopting a behaviour, we have to register it in our prefrontal cortex which is also called as the thinking brain consciously. The new routines got to perform enough times for brand fresh connections to be made thereby strengthening the signals to the brain making it as a default patter, reducing the difficulty as days goes by. Jim Rohn quotes, “Motivation is what gets you started; habits are what keep you going.

Dr BJ Fogg in his practical theory class ‘Tiny Habits’ quotes “to make a habit, you would like to form it sufficiently small for it to be unfailing consistent for the very beginning. If you’d wish to write, start with one paragraph if you want to start walking, begin with a three-minute walk, or practice one measure of music for five or 10 minutes.

The goal here is not the quantity or volume. Once you get into this groove it becomes automatic, so start by setting yourself up to succeed by giving yourself goals that are easy to meet.

Let me quote an example of how I, formed a habit and have been implementing it daily for the last five years. As a family, we did not have the habit of brushing our teeth twice (once while you wake up in the morning and once in the night before hitting the bed) as is the traditional norms prescribed by the medical fraternity. It was tough for me too to implement this on self.

Once on a holiday in the year 2015, while casually discussing, we decided to start the norm of two times brushing.  It was simple, each night post our dinner we will also start brushing and then only head to sleep.

Night-time brushing was always a huge NO for us because we always felt that was the most difficult thing to do at that time. I, myself had resented this idea and was cursing self for approaching this topic especially when we're on yearly leave, but we all unanimously hesitatingly decided to implement but with a little caveat.

We had two choices, either, offer a reward for brushing, or punish for not brushing during the night and after a lot of deliberations decided to levy a small fine of Rs. 10/- when anyone forgets and the proceeds have to be provided to all those who brushed.  For a few individual Rs.10/- will appear as a very small, but both my kids aged thirteen and seven it was big because it amounted to the parting of Rs. 30/- every time they did not brush and this in some way was a way bigger punishment for both.

Both the kids even visited theextent of calculating if they don’t brush for 30, days the loss for them will be as high as Rs. 900/- per month, and with less cash in their piggy banks (money received from friends and relatives during their visits to their house or if somebody visited our house) they were not ready for this as they did not want to forego even a rupee from their collection.
Initially, we did falter and I had to give money to all but I don’t remember a single day when the kids defaulted. Every morning all the three would wait at the bedside of the one defaulter asking for the immediate cash.

What once was deemed to be a difficult habit was broken thereon day, and it has been now a little over five years, we cannot sleep without brushing as it gives a guilt feeling. We have all gone to sleep at odd hours but not before brushing as it has now become our ritual.

Becoming 1% better each day could be a really simple and practical way to achieve big goals. We used this same practice to cultivate another habit i.e. for saving money for our yearly trip beforehand. We’ll start depositing a fixed amount every month until the month of the travel. This box will be opened only on the date of our travel and to our relief and benefit we, have managed to save average 60% of our trip cost in advance, and it does not hit us hard when we plan our annual trip.

Both times we’ve understood the results often do not come as quickly as we had hoped, we could have easily lost the plot, within the method, lost the motivation and would have given up, but for our persistence and perseverance. It was possible because we had a clear goal, held each other accountable and the willingness of all concerned to lend a helping hand and see that nobody falters.
Breaking a bad habit or developing an honest one might be diligence, but it’s not impossible. 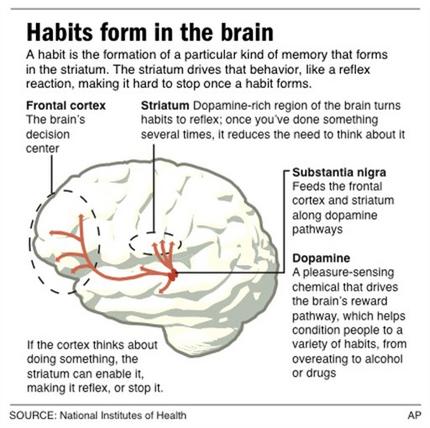 Excellent article !!
It has touched the real subject. Keep it up !

Excellently written, i will implement it in my life too.

True, quite true... I remember the defaulters pain which we had practiced and come over. Good article very understandably presented.

Liked the way you put it. Trust me - I am gonna brush my teeth tonight and every night henceforth. You've taught me a good lesson on Inculcating a habit. Cheers Bro!

Interesting. You touched the right chords. Personality is dynamic and it is the newly acquired habits which make it the same. Each individual is nothing but a combination of certain habits in certain proportion.